How to Increase Your Iron Intake Safely

Are You Low in Iron? Find out how to increase your iron intake safely.

Did you know that one of the most common nutritional imbalances is iron deficiency?

Did you know that iron deficiency affects at least 20 percent of American women, It is a form of anemia , a chronic state of low haemoglobin (the oxygen-transporting component of red blood cells) and caused by a lack or poor absorption of iron.”

What does iron do for the body?

Iron in foods comes in 2 forms: heme and nonheme. Heme iron is found in animal foods that contain hemoglobin and myoglobin.

Our bodies easily absorb this type of iron.

Nonheme iron is found in plants, such as

lentils and other beans.

Heme iron is absorbed more easily than nonheme. And the absorption of heme iron is not affected by other nutrients in food.

Heme iron is an important dietary component for promoting cognitive health, including memory, ability to learn and reasoning. Heme iron is particularly beneficial for growing children because research indicates that some toddlers are at higher risk for iron deficiency, and childhood iron-deficiency anemia is associated with behavioral and cognitive delays.

How much iron do you need to maintain a healthy body 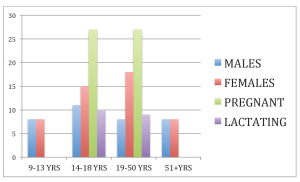 Healthy adults absorb about 10% to 15% of the iron in foods. But several factors can affect the actual amount absorbed. One factor is the type of iron.

Some chemicals make it harder to absorb non heme iron.

Menstruating women need more iron because some iron is lost in menstrual periods, as do women who are  breastfeeding. As can be seen in the diagram, pregnant women need about twice the daily iron as women who aren’t pregnant. If you are pregnant, follow your health care provider’s advice on iron intake.

Iron deficiency signs and symptoms include:

Symptoms of long-term iron deficiency include:

Compare the iron from bison meat and other meats

Do the math, dollar for dollar, you get more than your money’s worth

Eating bison meat over beef. You are paying for is almost pure protein. 15 -30% more than beef. And because it has so little fat, it doesn’t shrink during cooking.