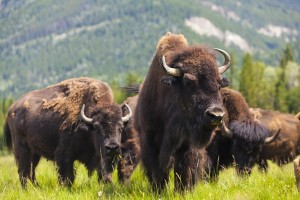 Some are listed below. If you still have any questions pertaining bison meat or comments on our website, please Email us

Where can I find more information about bison?

The best source of information is to contact the NATIONAL BISON ASSOCIATIONor the CANADIAN BISON ASSOCIATION.The NBA produces the Bison Breeder’s Handbook and publishes a magazine – Bison World while CBA also produces the Smoke Signal handbook. They also have a membership directory for its members which can be used to locate other producers in your province or state. Many provinces or states have their own bison association. The NBA and the CBA can give you more information on this.

Q. What is the difference between buffalo and bison?

A. The difference between bison and buffalo is nothing or a whole lot depending on what you mean. Let us explain: The animal that we’ve come to know and love in this country as the buffalo is the same as the bison. People refer to them as both names. And that’s OK. There are 2 subspecies of bison in North America: the Plains Bison (mainly in the U.S. and Canada) and the Wood Bison (mainly in Canada.) There is also a European Bison called the Wisent (pronounced wee’sent). All 3 look a little bit different from each other. The scientific name of the bison is “Bison bison” (Genus species). However, the bison is not a “true” buffalo scientifically speaking. There are at least 2 true buffalo which include the African Cape Buffalo and the Asian Water Buffalo.

Many people in the bison industry package the meat they sell as “bison” so customers know for sure they are getting bison and not water buffalo.

Q. How do bison compare to cattle? Are they tame?

A. We have worked cattle, and bison are much smarter and more interesting. Bison are WILD animals and must be treated as such! They can’t be really tamed, they just get used to you. They are harder to handle, and some animals may never tolerate you coming near them. Visiting a producer can be a real eye opener as to the power and agility of these animals. Not to mention the fencing requirements!

Production methods are similar to those for cattle. Exceptions: The use of growth hormones is illegal for use on bison, and bison are generally not castrated. Bison grow at a slower rate than cattle, so to castrate them would be cost prohibitive for meat production.

Another issue is that bison respond poorly to tranquilizers. We know of several bison that have died as a direct result of using a tranquilizer gun. There is no need to do this if bison are handled properly.

Q. What do bison eat?

A. Grass, grass, and more grass. Bison eat more grass as a percentage of their diet than all other range herbivores.

Q. How much do they eat?

A. They eat about as much as cattle. It’s important to understand the carrying capacity of your land. What we mean is grass production. Talk to your county agricultural extension agent. In our area, grass can carry one adult bison (or beef cow) per 3-4 acres ON AVERAGE. We have to manage our grass to get this. This includes planting, fertilizing, weed management, when to put the bison in the pasture and when to take them off (We have several pastures we rotate them through), and when to make hay. Don’t plan on feeding hay year round, because its expensive and animals don’t do well on hay year round.

We can’t reiterate enough how important grass management is. Just imagine if you had to feed your entire family on food you grew in your yard. You would place a lot of importance on it! Get your pastures established first. Feeding hay that you did not grow on your land can be very expensive. And you want to feed them as little hay and as much grass as possible by managing your grass wisely.

Q. Can they forage their food even in winter? 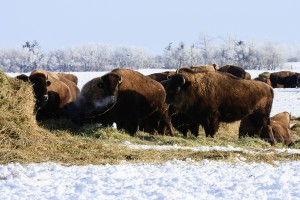 A. The only truth that bison can forage food in the winter is that they are able to “plough” their head into the snow to get at grass; cattle won’t do that. However, if there is no grass, the bison will starve. Also it is important that the “standing” hay (grass left standing in the fields going into winter) be able to hold its nutritional value in the winter, many grasses do not. We have been told it is mainly the short prairie grasses that will retain their nutrition.

If you rely on standing hay, then this must be managed correctly before winter. Bison can’t eat weeds and be expected to survive. Most any bison (or cattle) rancher will go into the winter with a certain amount of baled hay put up ahead of time. Some ranchers also supplement with range cubes advisable if the baled or standing hay is not of sufficient protein content (approximately 7%.) If you have a lot of bison, it is better to use large round bales instead of small square bales. You would then need a tractor to move them. And don’t bother using a hay ring; bison make play toys out of them!